China’s space aspirations can be tracked back to the announcement of its nuclear program (codenamed 02) by Chairman Mao in 1955. Despite initial technical failures, drops in support from the Sino-Soviet split, and budget re-allocation during the Cultural Revolution, China has made great strides in the past 40 years. These efforts can be partially accounted to China’s comprehensive long-term space dominance strategy, a key aspect of its 100-year plan.

China expects to exceed all other nations by 2049 and progresses steadily towards that goal. China was the 3rd state to launch an astronaut into space. China had 38 successful orbital launches in 2018 representing more than a third of world-wide orbital launches. Meanwhile, the U.S. had only 34. The Long March rocket series was responsible for nearly all Chinese launches (37). 11 private Chinese space startups have emerged in the first quarter of 2019 alone. The PRC also operates the second most satellites of any nation.

China hopes to establish a manned lunar research outpost by 2036. The Chinese Lunar Exploration Program (Chang’e) lays the ground work for a crewed mission by conducting several robotic Moon missions. Chang’e 4 lander deployed the Yutu 2 rover on the dark side of the moon late last year and contained the Lunar Micro Ecosystem. The Lunar Micro Ecosystem (LME) experiment is a metal cylinder containing cotton, rapeseed, potato, Arabidopsis, yeast, and fruit flies eggs designed to test the effects of lunar gravity on living creatures. The plant seeds did germinate, but did not survive the lunar night which lasts 14 days. Chang’e 5-T1 began testing atmospheric re-entry capabilities in 2014 and is expected to conduct the first lunar sample-return mission since the Soviet probe Luna 24 in 1976.

China has or is in the process of developing counterspace weapon across the spectrum. There are four types of weapon types, each with distinct characteristics. Together, they represent a full range of counterspace threats facing the U.S.

China invests heavily in space technology in accordance with its strategic goal to generate wealth through a space-based economy. Financial analysts predict that space will be a $2.7 trillion economy by 2040, and China hopes to be involved in it. Officials identified four areas for exploration: lunar exploration, orbital real-estate, space-based solar power, and asteroid mining.

If China gains control of cis-lunar space, there are no guarantees for fair access. China’s history in Antarctica, the South China Sea, Tibet, and other resource rich areas does not bode well for shared access. A Chinese official was quoted as saying “if we regard space as the earth than the moon is the Senkaku Islands and Mars is the Spratly Islands or Reefs.”

Contrary to China’s public statements on the peaceful use of outer space, the PLA is focused on developing counterspace capabilities. These weapons systems are not just for show and deterrence. The PRC actively asserts its justifications and capability to use cyber and non-kinetic physical counterspace weapons against U.S. space infrastructure.

China’s space program outlook depends on its own technical developments and political resolve, but also U.S. action or lack thereof. China demonstrates consistent support for its space program and identifies it as a key step towards Chinese primacy. U.S. engagement, coercion, and deterrence posture are significant variables for China’s space future. Should the U.S. choose inaction, China will probably be the main force for research, exploration, and commerce in space.

China likely has the means, opportunity, and motives to use cyber and non-kinetic physical counterspace weapons against U.S. space infrastructure.  Should the U.S. fail to alter China’s space warfare calculus, attacks on satellites will probably increase. The U.S. can increase the costs of Chinese strikes by improving attacker attribution and enhancing U.S. countermeasures. The U.S. could alternatively proliferate satellite systems to create redundancies, reduce reliance on single installations, and decrease the benefits of action.

China likely has developed a comparative advantage in space warfare against U.S. space infrastructure. China has repeatedly demonstrated the vulnerability to satellite systems by testing a full-range of counterspace capabilities. Should the U.S. not take appropriate steps to harden existing systems, China’s attacks on U.S. systems specifically will nearly certainly continue.

China will probably continue to meet its space development goals. China has invested significant capital into its space program. Over the past 20 years, China has met each of its benchmarks. As such, the U.S. should take the Chinese space goals seriously and consider crafting a long-term space resource guideline of its own for commercial and military development.

It is a probable that China will use “first presence rights” to justify lunar territorial claims. Should China’s investment in multilateral space initiatives fail to meet its goals, China will probably pursue domestic law. It is improbable that international legislation will constrain its willingness to use military assets in space unless coupled with multifaceted civic engagement. 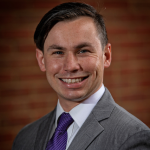 Tyler Farley is a graduate student at the Patterson School of Diplomacy & International Commerce and contributing editor to the Patterson Journal. Tyler’s current research focuses on cybersecurity policy, weapons proliferation, and human trafficking with emphases on Latin America and Southeast Asia. When he is not busy trying to teach himself Spanish, he enjoys cycling the rolling hills of Kentucky. Tyler holds a Bachelors of Arts in Criminal Justice and Exercise Science from High Point University.